The article below was originally published on the Clemson University news site at this URL:
https://news.clemson.edu/reopening-of-legacy-campground-helps-extension-build-economic-momentum-in-rural-sc/

Mt. Carmel, S.C. — Born and raised in Abbeville, Lindsey Jones had long carried fond memories of camping at Hester’s Bottom with her late father and longed for a day when it might reopen.

Little did she know less than a year ago that Clemson Cooperative Extension had been working to make that happen since 2016, or that she would be the one doing the reopening.

Master Extension Associate Wilder Ferreira began meeting with the U.S. Army Corps of Engineers in 2016 about the potential of reopening the campground property for investors. Once Ferreira got the go-ahead last fall, Jones and business partners Keith and Melanie Stewart wasted no time — almost literally.

“There’s a lot of nostalgia here for us, a lot of great memories and that was a major reason we felt drawn to get it reopened,” said Jones, the operating partner. 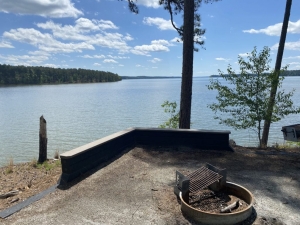 Hester’s Bottom offers 39 waterfront RV sites and five waterfront primitive sites. All the sites include WiFi — thanks to West Carolina Telephone Cooperative providing fiber broadband to the campground — and the RV sites offer 50-, 30- and 20-amp services.

Jones took her first tour in November, submitted a proposal to the Corps of Engineers within two months and by February was standing in front of the Corps board of directors delivering her pitch. About three weeks later, she learned her group had been awarded a 25-year lease.

“At that point, we geared up and started working,” she said. “So, it’s been about three months from start to opening that we have been cleaning up the property, the bathhouses, everything that’s here.”

Located in tiny, rural Mt. Carmel — population 237 at the 2000 Census — in McCormick County, Hester’s Bottom is largely isolated from the outside world … and Jones believes the “middle of nowhere” location could be a major draw for the campground.

“I think that because it’s so rural and quiet, that’s our niche,” she said. “We live in a world where there’s nothing but hustle and bustle, and obviously, with the recent pandemic, I think everyone is looking for an escape. It really is a beautiful piece of property, and I feel like you kind of find yourself when you’re here. All the sites are on the water, so you can wake up in the morning and drink your coffee in peace and quiet and look out on the water.”

For Ferreira, the project is part of his work with the Freshwater Coast Community Foundation (FCCF) — a 501(c)(3) organization launched in 2013 with the help of West Carolina Rural Telephone Cooperative — to revitalize economic development in Abbeville, McCormick and lower Anderson counties.

“Six years ago, there was no farmer market in McCormick or Calhoun Falls, so this place was shut down,” he said. “And I was the guy coming to help out. I invested a lot of time with the Army Corps of Engineers, and they were so nice to work with. So, we got a meeting once, in 2016, of like 20 people. I brought people from Columbia, the S.C. Department of Commerce and the Department of Agriculture — they all came to this meeting. People would say, ‘Eh, it’s not going to work.’” 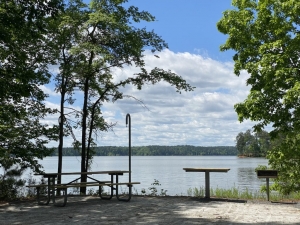 June 15 marked one month since Hester’s Bottom held its ribbon cutting. Over 700 guests visited on that first day and nearly 1,500 guests stayed at the campground within that first month.

But not only did it work, since the campground opened in May, it’s off to a rollicking start.

June 15 marked one month since the ribbon cutting. Over 700 guests visited on that first day — much more than Jones expected — and nearly 1,500 guests stayed at the campground within that first month.

While Jones and Ferreira both put in plenty of hard work to see the campground reopen, there is irony in the fact the two only met weeks before it opened.

“I actually just got to meet with Wilder,” Jones said, “but I have been told from various contacts that he was the background of this, that he has been working with the Army for years, trying to convince them that it would be beneficial to the community and that it needed to be reopened, and I really think that he was the buzz in the ear that convinced them to open it up to investors.”

But the campground isn’t the only exciting new attraction in the area. In addition to farmer’s markets that had previously closed or did not exist in downtown McCormick and Abbeville, visitors to the park who drive in along S.C. Highway 81 will notice the recently opened Mt. Carmel Café, where Chef Raymond George is serving up fresh and locally sourced food for breakfast, lunch and dinner. The restaurant will host a Grand Opening & Ribbon Cutting Celebration from 1-3 p.m. on July 15 with barbecue, live music and door prizes.

For FCCF Charter Board Member Wes McAlister, who owns both the café and a local furniture store directly adjacent, the opening of the campground is going to “make a real difference in the community.”

“When you can double traffic from one car to two cars, that’s a great thing,” McAlister said. “But when you start talking about 100 cars to 200 cars, it can make a real impact. And we know that this legacy park here has such deep connections with a lot of people within a 45- to 50-mile radius that they’re excited that she has partnered with the Corps of Engineers to get it opened. But I go back a step further, the opportunity that she has, the opportunity that was pushed upon me, would not have happened without the vision of the Freshwater Coast Community Foundation and Clemson University, with Wilder Ferreira as the mediator and moderator.” 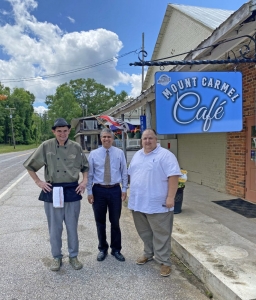 McAlister said that in addition to his business and economic development expertise, Ferreira’s “special knack” was in making the connections between people who could make these things happen.

“Wilder has a special gift of bringing people together, but also gently walking away — not in retreat mode but in letting the people do the business; letting the people control the situation,” he said. “His gift, I think, has been in bringing people together to talk and be innovative, as well as his gift of Excel and building business plans to help the mom-and-pop businesses throughout these counties, providing expertise in grant-getting for the City of Calhoun Falls, trying to help the City of Abbeville, small mom-and-pop dairies that would have gone out of business if it weren’t for Wilder’s assistance in promoting those smaller enterprises.”

“Wilder is the person on the ground, but we couldn’t have done this if it didn’t start with (Clemson Extension Director) Tom Dobbins and (Sandhill Research and Education Center Director) Kathy Coleman,” he said. “They were critical in moving the FCCF forward, and the great thing about it is the sustainability: We’re not just running down dollars and, after the dollars run out, the program ends; it continues on.”

Ferreira believes the campground will only add to the momentum of economic development he sees taking place in the Freshwater Coast region. 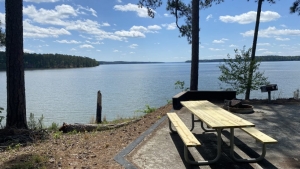 Located in rural Mt. Carmel, South Carolina, in McCormick County, Hester’s Bottom is largely isolated from the outside world, and operating partner Lindsey Jones believes the “middle of nowhere” location could be a major draw for the campground.

As for those who would like to visit the campground and enjoy its peaceful environment and scenic views of 71,000-acre Strom Thurmond Lake, Hester’s Bottom offers 39 waterfront RV sites and five waterfront primitive sites. All the sites include WiFi — thanks to West Carolina Telephone Cooperative providing fiber broadband to the campground — and the RV sites offer 50-, 30- and 20-amp services.

Guests have access to a private boat launch, boat dock, can fish from the banks and enjoy the private beach and playground. It offers three bathhouses, each with private hot showers, and activities including fishing, swimming, walking, bike riding, kayaking, picnicking or just hanging with friends and family and watching the sun set in the water.

“A lot of campgrounds, not just around us but nationally, they stack the campers in right beside each other, and here you’ll notice that everything is so secluded and private, you don’t have to see your neighbors if you don’t want to,” Jones said. “You can come with just your family and have a nice, quiet vacation, but we also have a lot of things for children. I feel like we’re going to be able to accommodate retirees that maybe don’t want to hear everyone’s kids because they can be in a quiet site, but we also have the amenities for children where the families can just get on the golf cart and go to those spots.”

From SCNPS: Open House at Parks Mill Spiderlily Preserve May 14th and 21st
Scroll to top