Savannah Lakes Village and their partners, SLV Windfall Group, LLC were presented this year’s Chamber of Commerce Excellence in Business Award at the Annual Dinner on January 31, 2019. We are so fortunate to have both businesses continually striving to positively impact the economy of our county! 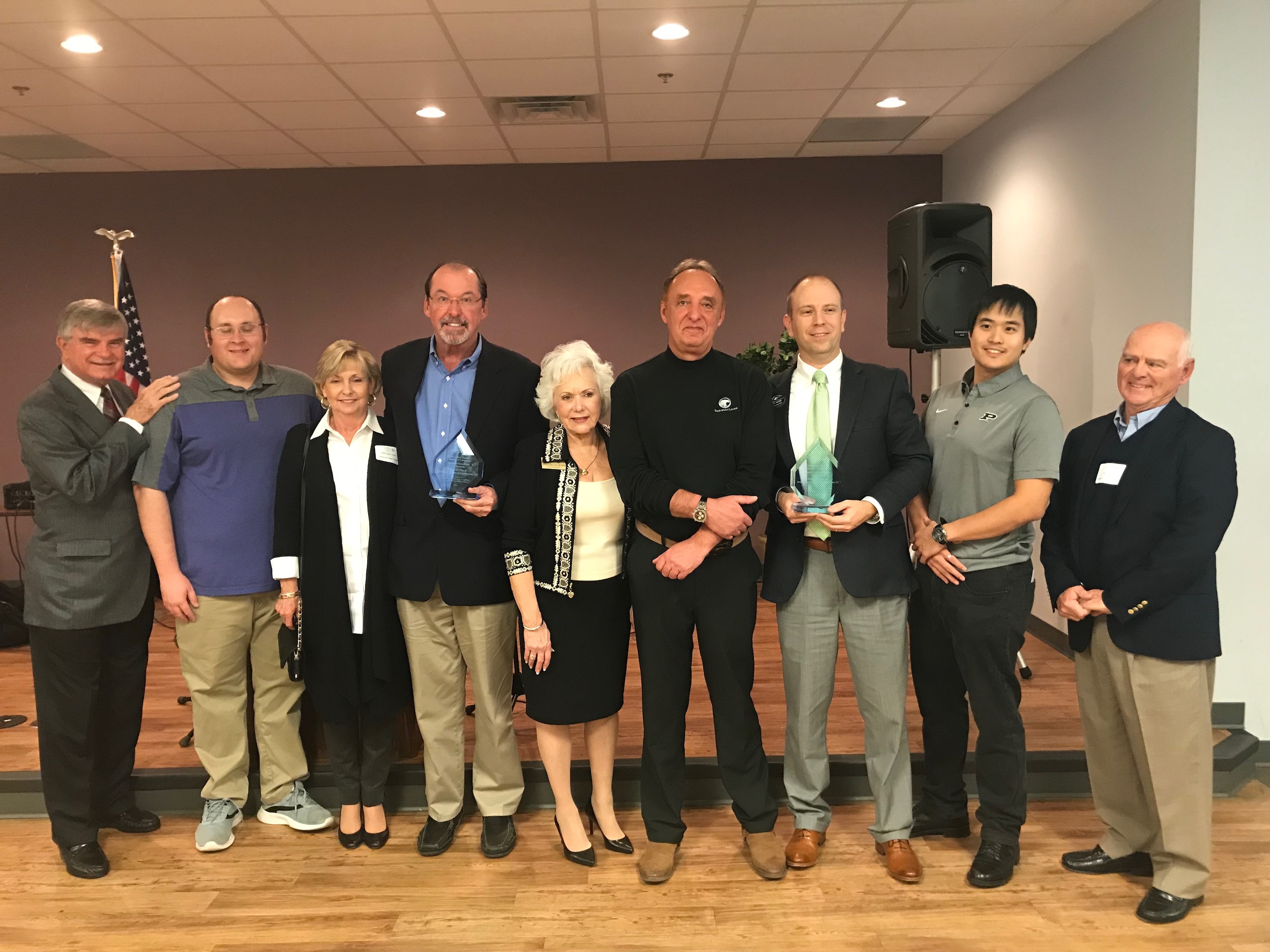 The MACK’s Community Threads program was awarded this year’s Non-Profit Award for Excellence at the Annual Dinner on January 31, 2019.  The positive impacts these amazing women have made on our community are innumerable! 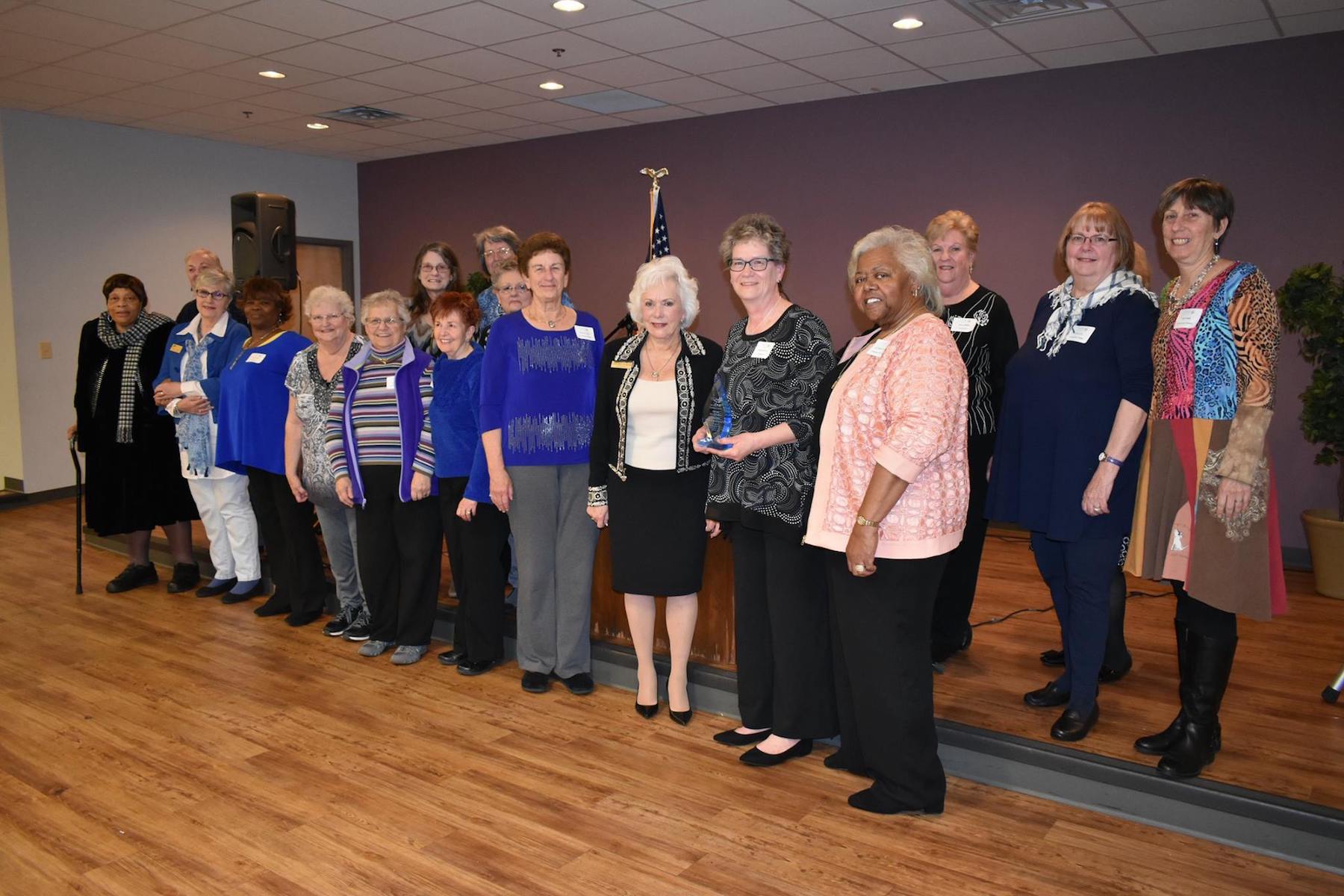 Above are just a few of our Community Threads members with Charlotte Tallent (Executive Director of The Chamber, center) and Ann Marie Smith-Nash (outgoing Director of the Chamber Board of Directors, far front right)

###The below article was written by Bob Stockton and is courtesy of The McCormick Messenger:

Chamber Chair Anne Marie Smith-Nash welcomed the crowd and introduced chamber board members. Smith-Nash has been board chair for the past two years, and she and Executive Director Charlotte Tallent have been with the chamber for the past four years.

Four candidates were nominated for election to the Chamber board: Tonia Bandy of First Citizens; Lucinda Deason of WCTEL; Shay Franklin of Insurance Corner, and Linda Jones of Piedmont Technical College. All four were elected.

After a brief review of the past year, Talent announced that Dr. Angela Franklin, a native of McCormick, graduate of Furman University and now president of Des Moines University, will be the keynote speaker at this year’s annual Women in Business annual
awards luncheon in October.

Tallent announced a new downtown group named MAD (Making A Difference) was meeting on the first Monday of each month at the chamber and that Shaaron Kohl at the Red Rooster was a contact person.

The chamber added 34 new members last year and is now up to 173 members. “People in the surrounding areas are beginning to take notice of what is going on here in McCormick County,” Tallent said.

She said that the chamber answers an average of 200 phone calls and welcomes more than 250 visitors each month. She recognized gold sponsors Self Medical Group, Carolina Health Centers, and silver and bronze sponsors Forest View Manor, First Citizens, the MACK, Abbeville/McCormick Habitat for Humanity and Strom’s Pharmacy.

The chamber is partnering with local organizations such as the county economic development department, the Town of McCormick, Railtowns, the MACK and the Dorn Mill Complex. State partnerships include Clemson Cooperative Extension Service, Freshwater Coast Community Foundation, and the SC Small Business Development Center.

Tallent talked about increased advertising for events such as Gold Rush, Independence Day boat parade and fireworks, the Little River Blueway Festival, Holiday on Main and expanded activities during those events.

Mike Ellis, general manager of the Little River Electric Cooperative, was the guest speaker, and he concluded his presentation by taking questions from the audience. Zingo Wideman, a recent Coastal Carolina University graduate, provided keyboard music throughout the evening.

McCormick Chamber of Commerce Executive Director Charlotte Tallent reviewed the county’s business activity during the past year, and she gave specific descriptions of projects along with illustrated images.

A video presented the McCormick Farmers Market with spokespeople Will Ferreira and Barbara Hinkel and identified it as the fourth largest farmers market in the region.

A marketing campaign with WJBF Channel 6 TV is in the works for this year.

County voters approved a capital projects sales and use tax in 2016, and it went into effect the following year. Proceeds have already purchased a new public safety emergency radio system for law enforcement, fire and EMS departments. An emergency operations center is planned for next to the county administration building with construction to begin this year.

The MACK’s Painting a Brighter Future is expanding to painting murals in Plum Branch and Willington. Various partners are working together to develop a McCormick Promise program for graduating high school students entering Piedmont Technical College.

The Town of McCormick has received a $500,000 grant for a street scape project which has been delayed due to slow approvals and over-budget bids. Town council is continuing pursue this project.

The county is working with the SC Aeronautics Commission to solicit funds to bring the McCormick Airport into compliance. Trees have been removed to install a donated windsock, and there is a possibility of building hangars to store planes.

Forty-one new homes were built in Savannah Lakes Village last year to boost the county’s tax base, and the Village is planning to accelerate growth in 2019.

Cliff Collie, director of radiology and pharmacy of the Self Medical Group, announced a new mobile mammography van and presented a photo of the unit which will be visiting McCormick.

The Chamber of Commerce receives Business Advocate Award from The Hardy Fou...
Scroll to top