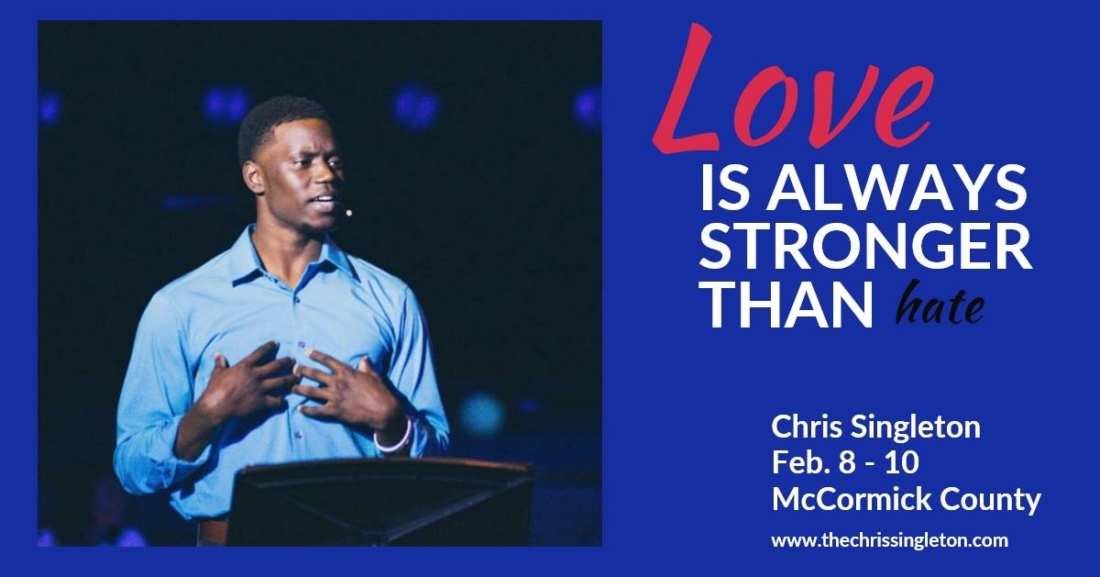 The Emanuel AME Church shooting on June 17, 2015 was an epic tragedy. A Bible study group welcomed a young man into their meeting.  He stayed for the entire meeting and then opened fire during the closing prayer. The gunman reloaded several times firing a total of seventy-seven shots and murdering nine people. He stated later that his sole motive was to provoke a racial war. Part time minister and beloved teacher Sharonda Coleman Singleton died in the massacre. Her son, Chris, had planned to go to the Bible study, but at the last minute had gone to a baseball game instead.

A starter for Charleston Southern at the time, Chris was nineteen when his mother was murdered. Less than two days following the massacre, Chris Singleton held a press conference with his coach, Stuart Lake, and his teammates. The entire world watched.  Many expected words that might incite the very war the gunman had hoped to instigate. However, Chris stood strong, held to his faith, and reacted the way he knew his mother would want. “There are two things I can do: be filled with hatred; or love and forgive the gunman. I chose to forgive him,” Chris said. “Love is always stronger than hate.”

When he chose forgiveness, Singleton describes a “200,000 pound weight being lifted.”  His strength and courage cast Chris into the spotlight. He appeared on The Today Show and spent the day with the Yankees. He hit a home run during batting practice with ARod and Brett Garner and threw the opening pitch at that night’s game.

Singleton–an outstanding athlete–has been featured in Sports Illustrated and on ESPN60.  After graduating from Charleston Southern, he was drafted by the Chicago Cubs into the minor league.  When he is not playing professional baseball, Chris Singleton tours the country sharing his message of hope and healing. When asked “how do you forgive”, he responds:  “How can I not forgive when I’m already forgiven?”

Thanks to the McCormick Community Relations Council, Chris will be the guest speaker at the Council’s annual banquet on Saturday, February 9th,  Tickets for the banquet are $20 and may be purchased from the McCormick County Chamber of Commerce, 100 S. Main Street; McCormick, SC or online here:  Buy Tickets. Chris will also speak to the student body at McCormick High School on February 8th and at two local church services on Sunday, February 10th. To learn more about Chris, you may visit his website: thechrissingleton.com. For more information, call The McCormick Chamber of Commerce at (864) 852-2835.

The McCormick Community Relations Council is a nonprofit, bipartisan, volunteer organization formed by The SC Human Affairs Commission five years ago with a goal to establish a council in every county. The mission of the McCormick Community Relations Council is to build bridges of cooperation, communication and respect throughout McCormick County.  Current members of the council are Rev. Dr. James Kinsler, Nadine Freeman, Paula Goldman, Mamie Banks, Major Robert Christie, Lelia Jackson, Pam Shumway, Harvey Freeman and Willie Mae Calhoun.

Holiday on Main 2018: The Work of Many Hands

The Chamber of Commerce 2019 Annual Meeting & Dinner
Scroll to top